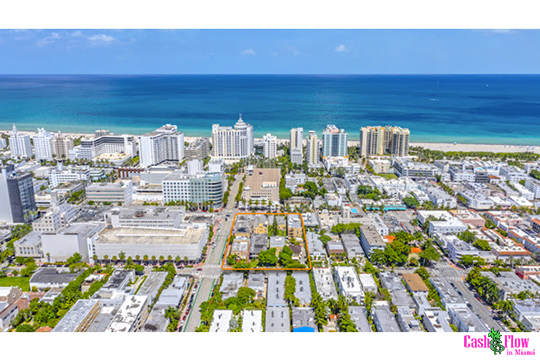 The unpriced portfolio was built over 40-plus years by the owner, according to a release. The seven buildings are owned by Gladisco Inc., headed by Roberto Datorre, records show. The buildings date back as early as the 1920s.

The site includes seven multifamily and retail buildings on 1.4 acres at the southwest corner of Washington Avenue and 16th Street in Miami Beach. It includes 98 apartments and about 10,600 square feet of retail across 13 spaces, for a total of almost 64,000 rentable square feet .Seller expects mid to upper $30 million sale here!

Notable tenants include the Chalan on the Beach restaurant, the Bikini Chic swimwear store and a cyber cafe.

for sale a 1.49-acre mixed-use development site (“Gladisco Portfolio”) encompassing one-half of a city block in Miami Beach, Florida. This site is located on the corner of Washington Avenue and 16th Street, walking distance to Lincoln Road in the heart of South Beach. The site is currently improved with a total of seven buildings which have 98 residential units and 10,632 square feet of retail space with 13 tenants. There are five multifamily buildings totaling 68 units, one commercial building with seven commercial spaces, and a mixed-use building consisting of 30 units over six commercial spaces.

Zoning is comprised of a mix of CD-2 for the parcels fronting on Washington Avenue and RO for the parcels which front on Drexel Avenue. All but one of the parcels are considered a contributing historic property. With very few remaining development sites of this size, this offering represents a very rare opportunity for a developer or long-term operator to acquire a portfolio of nine contiguous commercial and multifamily buildings on seven separate parcels from a family owner that has acquired, owned and operated the properties going back to the 1970’s.

World renowned location in the heart of South Beach, just off Lincoln Road and two blocks from the beaches

Billions of dollars of development in multiple large-scale projects currently in the process within blocks of the subject property.